You might have noticed it before. Our mostly veteran dog pack has a new addition – Jerry. It wasn’t easy at all with the name. I tried hardly to invent something nice before he came, but I won’t be able and otherwise, I wanted my Mom as his future owner decides about the name herself. So the first week with us we were still calling him “Puppy”. Then my Mom chose the name Jerry for him. You probably have read about Jerry’s first flight. Bellow you can find out Jerry’s other first time experiences.

I don’t know how I did it, but I managed to keep Jerry in secret from my Mom for almost two months. And I almost leapt various times and always realized it in the middle of the sentence and stopped. She might have suspected that she would get a puppy for her fiftieth birthday, but she would never imagine to get a Finnish boy with such long ears 🙂 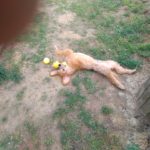 Because there must be some treat for a vaccination, you know 🙂 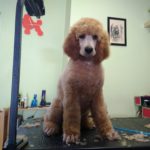 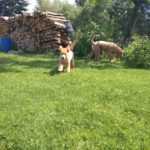 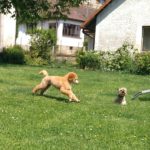 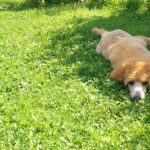 The first swimming in the pool

This website uses cookies to improve your experience while you navigate through the website. Out of these, the cookies that are categorized as necessary are stored on your browser as they are essential for the working of basic functionalities of the website. We also use third-party cookies that help us analyze and understand how you use this website. These cookies will be stored in your browser only with your consent. You also have the option to opt-out of these cookies. But opting out of some of these cookies may affect your browsing experience.
Nezbytné Vždy povoleno