On the New Year’s day, we changed our regular plan and instead of Krasna Hora we made a trip to Spulka lookout tower. Despide the muddy route, we had nice time.

On the second January Saturday, we travelled to Germany, where the Nürnberg CACIB took place. The poodles were judged  by Mr. Kay Smulczynski. Minon was entered in champion class and awarded excellent 1, CAC-DPK, res. CAC-VDH (after a champion) so we finally finished German Champion. The German champion is generally very hard to get, we did it with 7 CAC certificates 🙂 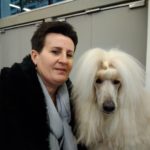 I’ve had some days off on the third January week, so we could make a plenty of walks out 🙂

Due to my holidays, I finally had time to make a visit of our “little” Tony (ANNIVERSARY TIN Ambershades) in z Hauserova království kennel. He’s exactly the some lover as his brother Diamond is and very resembles to his dad Charlie. Unfortunately, I didn’t catch any nice pic due to the new smartphone, but I made a funny animation from my attempts 🙂