It is long time ago we published some news for the last time. We’re interesting and active spring.

Maja is officially a brood bitch

In March we passed with Maja club breeding examination and Maja is officially a brood bitch. The same time she got into her first heat, now she is my big adult girl. If you are interested in Maja’s health testing results, you can find them here. Maja’s full set of teeth and she is 57 cm tall. During this year I’m planning to have the genetic testing for both standards done.

We managed to find agility and basic obedience training nearby, so since April we are participating the courses. We have no sporting ambitions, it is rather our hobby. Despite our expectations the dog who fell absolutely in love with agility was Charlie. Maja started to enjoy the trainings just after we showed her the beam. Donatello and Tess also participated two lessons of agility with us and enjoyed it well. 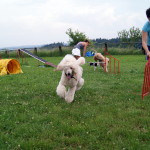 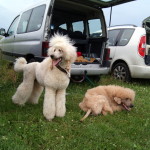 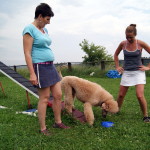 This year we made a long show pause. First reason are our new sporting activities, second was Maja’s growing hair after Charlie’s grooming first experience in January. By the time the hair was almost grown up in May (and when I entered Maja for a show) Charlie tried his “grooming” skills again and ate her hair for the second time, this time only on one side. If everything goes well and I will be able to keep Maja’s ear hair long, the lack of hair could be hidden under the ear hair.

Last weekeng me and Charlie participated after a year pause small club show five minutes driving from home. Charlie was entered for the first time in the honour class winning Ex.1 and club-CC. This was a nice end to his succesfull show carrier. After arriving home I groomed him in terrier clip for enjoying more the garden, the agility and feeling better in summer. 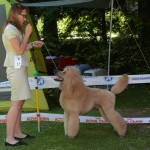 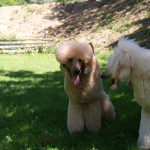 Hope to update the blog sooner than the last time!