As usual…I’m a little bit late with updates 🐌… There are recent photos from our Anniversary litter I’ve received from the owners recently (more correctly this year 😂). Anniversary puppies’ve celebrated their 4th birthday this year🎂. I would like to say huge thank you to their owners for taking such good care to their four-leg-🐩-partners.13 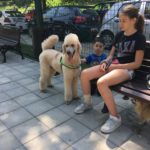 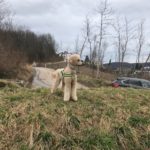 First June day in our garden

Finally, after several days of cold and rain, the Sun appeared. It would be pitty if I hadn’t taken few pictures. Starring: Jerry, Minion, Donatello a Tessinka. 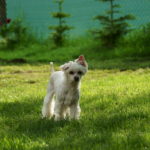 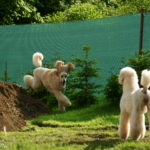 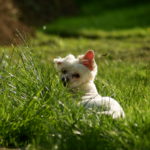 I’m always looking forward to grooming Maja, usualy as she does. She loves all the procedures from bathing thru drying to grooming. 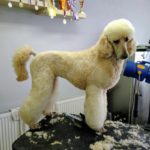 Jerry and his realization dream team (thank you Vendy, thank you Mom!) were brave enough to attend a European dogshow in Austrian Wels with temperatures reaching more than 35°C. Jerry brought home a VG from an intermediate class, but we’re contented with the result. 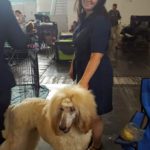 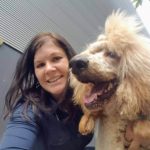 This will be the main topic for us for few upcoming weeks…hope not to annoy you too much. More information about litter B you can find here. 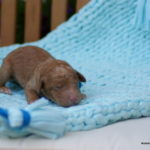 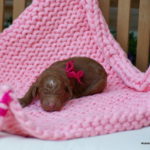 We’ve received news from Woody together with two videos and a pictures. I can see his father Charlie in him, both visualy and from the description of his behaviour from Woody’s ownerlady. On the videos, there’s Woody and his smaller (but elder) brother Zorba.

According to Woody’s relax position, it is obvious that his origin is in our family 😀

Big thanks to the owners, he really looks happy!

In December our “puppies” from the Anniversary litter have celebrated 18 months of life and it means they’re adult in accordance with the Czech breeding regulations. But they will probably need some more time to get truly matured 🙂

On that ocassion, Woody‘s sent us some new pictures (together with his friend Zorba, running on the walk and his favourite position for having rest). 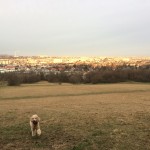 In mid December our Tess has celebrated 8th birthday and became a first veteran in our pack. We wished her a lot of health and many other years together.

And on 18 December sisters China a Minion met on an Advent Club show. 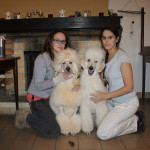 China got in the intermediate class Ex. 1 and a club CC. In the afternoon she was first in the competition Child and dog with her little ownerlady. 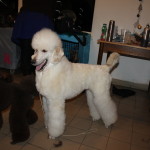 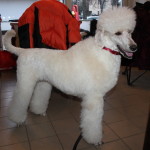 Minion got in competition in the open class Ex. 1 and club CC. 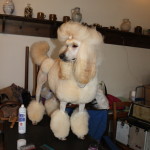 The weather outside was really bad, so we had no chance to have a walk and also the time for the indoor play was very short… 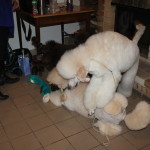 There are some news from November.

Me and Minion did a trip to  vycestovali na show trip to Germany.

We got fresh photos from Goldie… 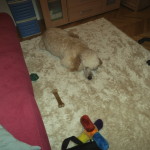 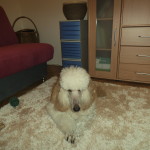 …and also pictures from China 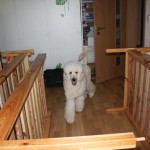 In the end of November Minion had run the last lure coursing training of this year, there is a short video of the finish of the trail.

And finally a picture of our beloved little lover Diamond.

We also got a very nice words about Woody (ANNIVERSARY WOOD Ambershades).

He is pictured together with his friend Zorba.

This time last year our Anniversary babies started to leave for new homes. There are some new pictures from some of them.

Woody (ANNIVERSARY WOOD Ambershades) enjoys the summer outside with his friend Zorba. They look very happy both of them. 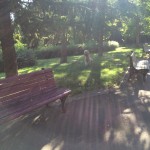 Ms. Mini (ANNIVERSARY PEARL Ambershades) got trough her first heat. She tries to look more adult, but its just a mask. She is still a crazy crossbreed of cangaroo.

Also Tony (ANNIVERSARY TIN Ambershades) shows a cangaroo genes are very strong. It’s funny how I can see in him both of the parents half-and-half. On other siblings I usually see they resemble more just to one of the parents.

Better later than never – we bring the news from the 11th month of life of our beautiful Anniversary “puppies”.

Tony (ANNIVERSARY TIN Ambershades) succeed on 21/5 at poodle specialty at Hluboká nad Vltavou. For the first time in the junior class won Best junior male. He also succeed at other poodle specialty in Kolesa on 4/6, where me, Minion, China and Diamond visited him. That time Tony won his first CAJC and BOS. Big congratulations!

Woody (ANNIVERSARY WOOD Ambershades) sent us the greetings from Austria. He is a great family dog, spending a lot of time on walk with his ownerlady and a friend Zorba. 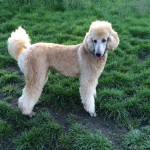 I had an oportunity to take care of China and Diamond for almost a month. It was sometimes a hard deal (with 4 standards and other 2 small dogs), but I must say we’ve enjoyed that. Both of them are honey bears and sweet characters.

Our Anniversary babies became a month older again and they’ve celebrated 10 months last Saturday. And how are they?

Diamond and Minion had joy in the garden

Pamino (ANNIVERSARY RUBY Ambershades) got a new hairdo and he’s enjoying a family life and his cat friends.

Woody (ANNIVERSARY WOOD Ambershades) is progressing in family dog trainings and goes for a long walks with his friend Zorba.

Goldie (ANNIVERSARY GOLD Ambershades) enjoys the spring in the garden. Finally, he’s decided not to be a gardener, but a fisherman – he loves fishing in the near pound.

Big thanks to the owners for the care and the pictures!

Our Anniversary babies‘ve celebrated 9 months this week. They’ve grown up quickly in funny long legged big dogs. It’s just a pleasure for me to see all of them developing. I must say big thanks to the owners for the great care and the pictures of course. 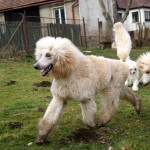 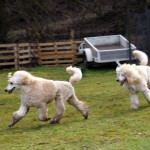 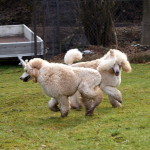 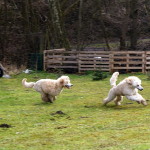 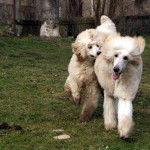 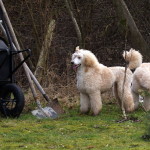 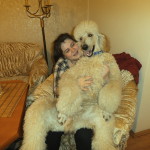 Woody (ANNIVERSARY WOOD Ambershades) has sent us two nice portraits and on picture from resting after having shower.

And finally some pictures from Diamond. He’s just a handsome boy. If we manage to grow up some coat on him, I would like to show him.