Better later than never – we bring the news from the 11th month of life of our beautiful Anniversary “puppies”. 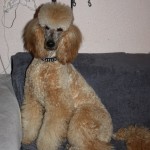 Tony (ANNIVERSARY TIN Ambershades) succeed on 21/5 at poodle specialty at Hluboká nad Vltavou. For the first time in the junior class won Best junior male. He also succeed at other poodle specialty in Kolesa on 4/6, where me, Minion, China and Diamond visited him. That time Tony won his first CAJC and BOS. Big congratulations!

Woody (ANNIVERSARY WOOD Ambershades) sent us the greetings from Austria. He is a great family dog, spending a lot of time on walk with his ownerlady and a friend Zorba. 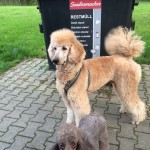 I had an oportunity to take care of China and Diamond for almost a month. It was sometimes a hard deal (with 4 standards and other 2 small dogs), but I must say we’ve enjoyed that. Both of them are honey bears and sweet characters. 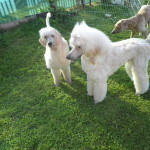 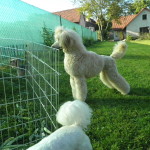