We’ve got this nice post about China (ANNIVERSARY CHINA Ambershades) written by her ownerlady herself. The translation to English was made by breeder.

The beginning of July we spent in Bechyně. China explored all the corners of an old cottage we staying in. While playing with a ball, she cleaned all the spider webs inside including the ones under the beds. She made a dog bed in the lawn in the yard where she comfortably spent the hot days. When Dad and children arrived, she switched laying in the flower bed and the lawn into soil digging together with children :-)…

Morning walks with aport training were replaced by siestas with a toy or without, because of really hot weather 🙂 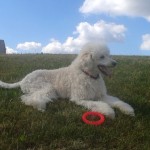 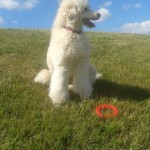 In the second half of July we had a nice week in Starý Kolín with China. She had great days full of play together with three medium poodles from Teschiro and other five dwarves. The smaller poodle friends learned China how to bark because of everything (I’m glad that she’s calmed down back at home as the master dislike barking). China was all the time very helpful to water the lawn resulting in being even wetter than whole the garden :-).

And so the grooming of the fur took place. 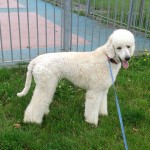 In early August we left for a three days holiday to Krkonoše together with a lot of other children. The acommodation in one of the Meadow huts above Špindlerův Mlýn provided splendid sceneries with views to nature. China accompained us in i lot of nice walks. She was even allowed to use a chairlift uphill to Portášky chalet. The chairlift was for three person so I convinced the service we can travel together. Unlike me she enjoyed the getting out in an upper station and tried to jump back to the chair to have one more ride 😀 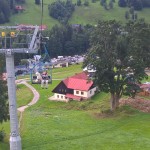 In mid-August we left for trip to Janské lázně and China together with us of course. This time she tried a cabin lift up to Černá hora. She jumped few times into moss and was pictured together with children on a huge stump. Together with us, China explored the Rocks of Adršpach including the hundreds of stairs on the way. She tried blueberries, fresh mountain spring water from local springs and some of them used also for bathing of herself :-). 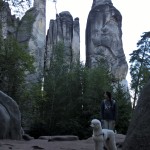 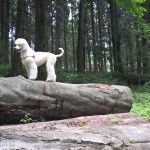 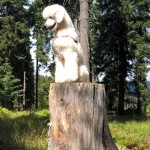 Morning scooter trips
We had supposed different timing, but the nature does everything a different way, so China’s second heat arrived a little bit unexpected. It complicated a little bit our regular walks, because there were lots of dogs everywhere in the end of vacations. So, finally, we start to using a scooter for our walks, because…

At the beginning of May China tried out to run by a scooter that we borrowed from a scooter rental to test if we are able to travel this way together. Since then both me and China were looking forward to our rides together. Desgracially I had a bad luck and broke one of my toes. After few month of scooter break we resumed the scooter trips and we also added my elder daughter Majda on the bicycle. Our ride/run trips in three are even better :-).

This website uses cookies to improve your experience while you navigate through the website. Out of these, the cookies that are categorized as necessary are stored on your browser as they are essential for the working of basic functionalities of the website. We also use third-party cookies that help us analyze and understand how you use this website. These cookies will be stored in your browser only with your consent. You also have the option to opt-out of these cookies. But opting out of some of these cookies may affect your browsing experience.
Necessary Vždy povoleno