Sometimes, things take their own direction despite our plans. Sometimes it is good. I’ve entered Minion to Anniversary club show in Prague, but finally I had a different plan for this Sunday. Two day before the show date I was persuaded to change my mind and participate to support Minion’s brother Tony who was entered, and his owners. Thank to this change of plan Minion’s brought home a big cup and other prizes. Tony was also successfull, both of them received nice critiques.

The baby class was judged by Mrs. Naďa Klírová (CZ), the final competitions by her and Mr. Laurent Heinesche (LUX) and Mr. Jussi Liimatainen (FIN). 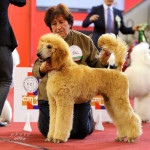 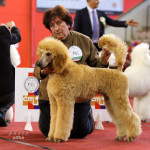 Tony is like a torpedo, he combines a show joy of his dad Charlie and an endless flow of energy of his mom Maja. 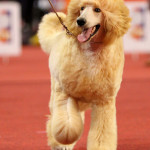 Minion definitely showed up her qualities, especially to people she was said to be short and fat of.

Both of them made me very proud and happy. They’ve great characters and are contactive and really happy buddies.