Our Anniversary babies became a month older again and they’ve celebrated 10 months last Saturday. And how are they?

Diamond and Minion had joy in the garden 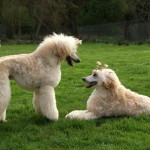 Pamino (ANNIVERSARY RUBY Ambershades) got a new hairdo and he’s enjoying a family life and his cat friends.

Woody (ANNIVERSARY WOOD Ambershades) is progressing in family dog trainings and goes for a long walks with his friend Zorba. 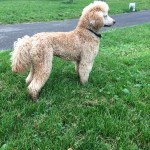 Goldie (ANNIVERSARY GOLD Ambershades) enjoys the spring in the garden. Finally, he’s decided not to be a gardener, but a fisherman – he loves fishing in the near pound.

Big thanks to the owners for the care and the pictures!